Majority of Eritrean dissidents prefer to write in English. It can be painful to follow Eritrean news and political works if you don’t know certain acronyms and popular non-English phrases. The following list should be useful to those not too familiar with Eritrean political writings.

ELF Eritrean Liberation Front (popularly called Jebha). A nationalist insurgency. The ELF started armed resistance against Ethiopian government in 1961, a year after it was founded. The ELF was the strongest nationalist group until it divided into competing groups in the 1970’s and was finally defeated and pushed out of the country in 1981 by EPLF (the strongest of its splinters).

EPLF Eritrean People’s Liberation Front (popularly called Shaebia) is a nationalist movement that started forming in the late 1960’s early 1970’s and officially formed in 1977. The EPLF defeated Ethiopian army and won Eritrean independence in 1991 . The EPLF renamed itself PFDJ in 1993.

G-15 A group of 15 prominent politicians within the PFDJ party that published an “open letter to the PFDJ” in May 2001. The open letter criticized President Isaias Afewerki. All were accused of treason and 11 members of the group were made to disappear on September 18, 2001, the remaining four were out of the country at the time and still remain abroad.

Ghedli Refers to the revolution and the armed insurgency for independence (1960’s—1991). The word is also used to refer to the era of the insurgency. Tigrinya [ገድሊ]: ‘struggle’.

Giffa The practice of raiding villages or neighborhoods (often at night) to recruit new conscripts and arrest suspected deserters. Giffa was a common practice of the Eritrean insurgencies (1960—1991), and is still a routine practice in Eritrea today. Tigrinya [ግፋ]: ‘to gather’

Halewa Sewra Shield of the Revolution. The internal security service of the EPLF. Tigrinya [ሓለዋ ሰውራ]: ‘guards of the revolution’

Hidri Suwuat Dream of the martyrs. Tigrinya [ሕድሪ ስውኣት]: ‘what our martyrs have entrusted us with’.

Isaias Afewerki President of Eritrea since 1993 and leader of the EPLF since 1975. Referring to persons with first name is proper in Eritrean culture and it is not common to refer the president by his last name.

Menqa Dissident political grouping of mostly university students within the EPLF that started around 1973-74. The Menqa group allegedly accused the EPLF leadership of undemocratic behavior, all were made to disappear by the EPLF. Tigrinya [መንካዕ]: the animal bat.

PFDJ People’s Front for Democracy and Justice. Formerly EPLF, it is the only party in Eritrea.

TPLF Tigray People’s Liberation Front. Ethiopian insurgency that overthrew the previous administration and assumed power in 1991. TPLF was a partner of the EPLF during the insurgency and an ally of PFDJ until the 1998—2000  Eritrea-Ethiopia border conflict.

Warsai A common name referring to the new generation national service conscripts. In contrast to the older generation of revolutionary fighters. Tigrinya [ዋርሳይ]: ‘One who inherits’.

Warsay-Yikealo the Warsay-Yikealo Development Campaign (WYDC) which was implemented in Eritrea two years after the end of 1998—2000 border conflict with Ethiopia. The campaign extended the 18-month compulsory National Service indefinitely. Under WYDC Campaign, conscripts are assigned work (military or civilian work) without salary except a nominal pocket money of 145 to 500 Nakfa. Conscripts who refuse to work are treated as military deserters and punished. Tigrinya phrase [ዋርሳይ ይከኣሎ] can be translated as: ‘The inheritor is all-capable’. (see Warsai and Yikealo)

Yikealo A less common name referring to the Ghedli generation of fighters (Tegadalay is more common), as opposed to the new generation of conscripts Warsai. Tigrinya [ይከኣሎ]: ‘all capable’ or ‘almighty’. (The traditional Tigrinya male name Yikealo is in reference to God, not insurgency fighters).

Corrupt governments often employ ‘puppet’ officials and yes-men but the Eritrean government system is a step ahead. Eritrean government officials (Ministers and army Officers) don’t even qualify as ‘puppets’ of the authoritarian regime. A ‘puppet’ would imply that the position they occupy actually is part of the system. In your traditional corrupt governance, the ‘puppet master’ may have power over the puppets’ function, but the post (be it a Minister or an army General) does exist.

For example a ‘puppet’ army General orders his army in accordance to the whims of his master. In other words the puppet master controls the army through the puppet. Here the post of General is part of the system. In the Eritrean case, the post of General is not necessary since the army is not organized in a way that they take orders from a General. The traditional army structure where army rank may exist up to a Platoon or maybe up to a Battalion, anything higher is underground and the official army ranks above that mean very little.

The same structure exists in the ‘civilian’ posts such as the government Ministries or the Courts. The value of official posts changes from real to ceremonial as you climb up a ladder of any government Ministry.

The Eritrean governance system is covert and in this sense Eritrean regime is very “organic”. The visible administration structure is just for show. The true administrative structure is underground. It is occupied with people that represent the government. This is very convenient for the dictator and has many advantages, for example: It is easy for the government to dodge  accountability for actions, the dictator is not threatened by his subordinates which have zero public visibility let alone support, it is harder for the dictator’s enemies to challenge a power structure they cannot see, etc.

Eritrean government structure is best understood by comparing it to other non-traditional kinds of administration. Many characteristics of the Eritrean government structure resemble the urban gang structure. In a gang there is no standard structure or official positions. However every body in the gang and the neighborhood knows everything they need to know. Everyone knows who calls the shots and who calls the ‘real’ shots. There are no official channels and information is spread by rumors. Everyone know who does what in the gang, they know who is whose rival. Everybody knows what actions have what consequences and Most importantly, it works!  Very similar to the Eritrean government and society. 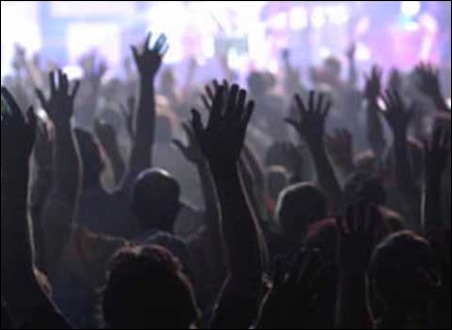 There is a peculiar lack of voice from Ethiopian Churches  about their brothers and sisters of Eritrea. The suffering of Eritrean Christians has yet to inspire gospel songs or sermons in any major conference.

So far I haven’t heard of any Ethiopian pastor or gospel singer talk about the persecution of Eritrean Churches. I am not aware of any special service done by the Ethiopians addressing issues of Eritrean Christians. This is not good. I am very fond of Ethiopian spiritual songs and sermons, they show great care and concern for their society. Why the silence on Eritrea?

P.S.: This blog is about silence of the Church in speaking publicly and NOT about silence towards God. One is not necessarily an indicator of the other.
I have written about the strange silence of Eritrean Churches on their own affairs (my articles “Mute and without opinion” and “Eritrean evangelical Christians are criminals” are some examples).

The courage of four Catholic Bishops in speaking out in Eritrea has lifted the spirits of ordinary men and women. A member of the ‘Freedom Friday’ movement, which links the Eritrean public with the international Eritrean diaspora, says that there has been a tremendous response to the Bishop’s letter, which criticised the Eritrean government. 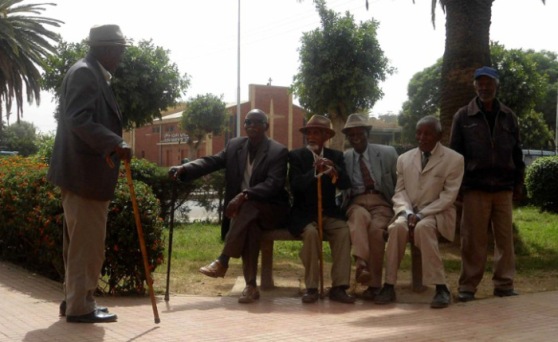 The 38 page letter, written in Tigrinya, has been photocopied and distributed around the capital, Asmara, and beyond. This carries a high risk, since it can only be photocopied in stationery shops, where government spies might see what is being reproduced. Despite the danger, the letter is being widely copied. “The message is going around like wild-fire,” the Freedom Friday contact explained.

The letter was signed by Bishops Mengsteab Tesfamariam of Asmara, Tomas Osman of Barentu, Kidane Yeabio of Keren…

In a recent interview with Australian SBS radio,Sophia Tesfamariam introduced herself as the Director of US foundation for the Horn of Africa, a non governmental organization based in the US. But if you are curious about her political affiliation, I strongly suggest a visit to her personal blog (at stesfamariam.com) and search for “pedophile“. Read a couple of paragraph of the search result for an insight on the Director’s opinions about those of us not very enthusiastic about Eritrean government.

In my recent article titled “the Authorized version of events” I had given examples of  typical Eritrean government responses to events in Eritrea. In that regard, Sophia Tesfamariam was not a disappointment.

Ms Sophia Tesfamariam is an unofficial-official representative of the Eritrean government. Asked if she came to Australia on official capacity representing the Eritrean government, she explained… It happens she’s been declining invitations by the Australian-Eritrean community year after year, this time she could make it so she’s here. The program host seemed satisfied with her response. He did not press the issue further.

Even though she’s not officially a government representative, she carries her self as such.

Eritrean government structure is better understood by treating it like an urban gang structure. There are no official guidelines or official posts but every body in the gang (and the neighborhood) knows everything. Everyone knows who calls the shots, who does what, who is whose rival, what actions have what consequences…–very much like Eritrean society.

Every Eritrean owes his or her citizenship to the current government.

I was in first grade when the brave triumphant revolutionary forces (the EPLF Tegadelti) marched into the city in 1991, ending decades of civil war and three decades of liberation struggle.

How does one accept the gift but reject the giver? The independence we so deserve was brought about by cruel and lawless bandits*. This is at the heart of Eritreans’ dilemma.

The common Tigrinya saying “ተቐባል ሌባ”, meaning whoever accepts goods from a thief is a thief himself, is overly simplistic to explain our dilemma. The saying assumes the “goods” one is accepting or buying from the thief is not rightly his in the first place which makes the verdict relatively meaningful.

In the case of Eritrean independence, the ‘liberators’ are outlaws because of how they fought the ‘good-fight’. To mention some of the morally repugnant practices that gave birth to our precious independence:

I only mention these because these are the most widely practiced and most undisputed atrocities of the insurgency that handed us our citizenship.

The matter of rejecting the outlaws and condemning their outlaw practices makes an Eritrean feel uneasy and a bit hypocritical.

Can you accept the hard won gift of independence and at the same time acknowledge the atrocities the gift-giver has committed to get you that gift? Alternatively, Can you reject a gift that you so deserve; a gift that was taken away from you by violence simply because slavery and child soldiers were used to retrieve that gift?

President Isaias Afewerki delivering speech on the occasion of the 23rd Independence day celebration, May 24 2014. President of the state for the past 23 years and commander in chief of the armed forces (former insurgency) for 39 years.

*“cruel bandits” not meant to describe individual fighters who gave all they have believing the EPLF’s propaganda.

{This article is also published at Asmarino.com}